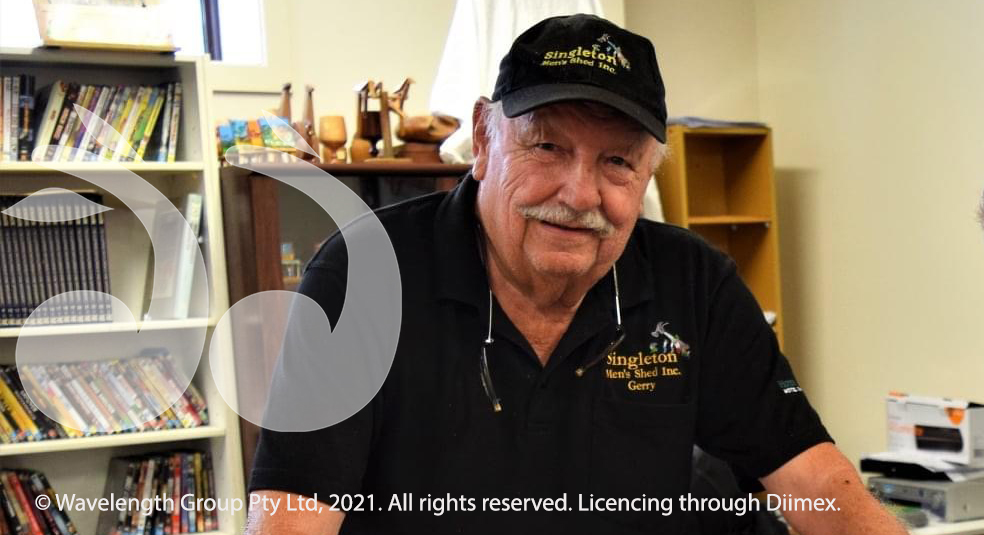 DURING the last eight years Singletonian and the Men’s Shed President Gerry Winter has been passionate about men’s health, companionship, getting guys together to share life experiences.

Mr Winter has lived in Singleton for the last 37 years, starting off his working career in the Merchant Navy for seven years he was working at the power station in Wollongong which was due to close.

“When I applied for the job, Bayswater was under construction, so I initially worked at Liddell power station before transferring over and finished my working career there,” said Mr Winter.

“I have three daughters who are all married to local boys, one of them has now moved down to Wallsend but I have nine grandchildren in the area,” he said.

“Singleton is home for me, I get to spend a lot of time with the grandkids,” he said.

Mr Winter has been part of the Men’s Shed for the last eight years, spending two of those as the president, with the hope to spend another year as president.

“I got involved with Men’s Shed for companionship and men’s health, I retired and suddenly realised my whole routine has changed,” said Mr Winter.

“I am no longer getting up and getting ready for work every morning, you can only mow the lawn a certain number of times,” he joked.

“The shed was a great idea, to come down here whenever I like and giving me some more purpose in life,” he said.

The Men’s Shed run workshops such as woodworking and welding, but Mr Winter said its mostly about getting the guys together.

“We have guys that come down here that are widowed, or some of them have been made redundant, these guys could be lost and lonely,” said Mr Winter.

“That’s why we aim to get everybody together, because there are people out there who suffer with depression, it’s not our aim but we also focus on suicide prevention,” he said.

“Men are very reluctant to come forward with their problems, we talk about prostate cancer which is just as big for men as breast cancer is for women.

“No one really talks about it, but here we do, and we support each other,” he said.

With the 55 members currently at the shed, Mr Winter did a survey and worked out that together they all have over 2000 years worth of collective experience in different fields of work.

“The best part about the shed is that if you have something that you need fixing but cannot do it yourself, someone here will know how to do it,” said Mr Winter.

Mr Winter and the guys at the men’s shed have been an ongoing bicycle project, the bike mechanic fixes them up and they give them back to the community.

“We either source the bikes from the tip or we get them donated, we put 40 odd bikes into the community around Christmas time, some even went as far as the Swansea area,” said Mr Winter.

“I think the bicycle project has been my favourite, we have also done work around here with the local nursing homes where we built barbecue tables,” he said.

There have been many fulfilling moments for Mr Winter when it comes to the restoration projects, he said we had a lady here in tears once.

“We fixed up her grandfather’s coffee table making it brand new again, she couldn’t believe it she was speechless,” said Mr Winter.

Mr Winter also loves his motor bikes, he brought all the guys from the shed together and called themselves ‘the Singleton Men’s Shed iron horse equestrian society’.

“Some of the guys here are motorbike owners and riders, I couldn’t help myself but give us that name,” said Mr Winter.

“It is our little activity that we do every Thursday, we have a social ride for about an hour, where we ride to Broke and get back in time for morning tea,” he said.

The Men’s Shed are currently in the process of refurbishing an old telephone box, for the community to use as a library.

“This telephone library will be placed on Dangar Road, filling it up with the books so community members can grab a book anytime,” said Mr Winter.

“You can even donate some books for other community members to read,” he said.